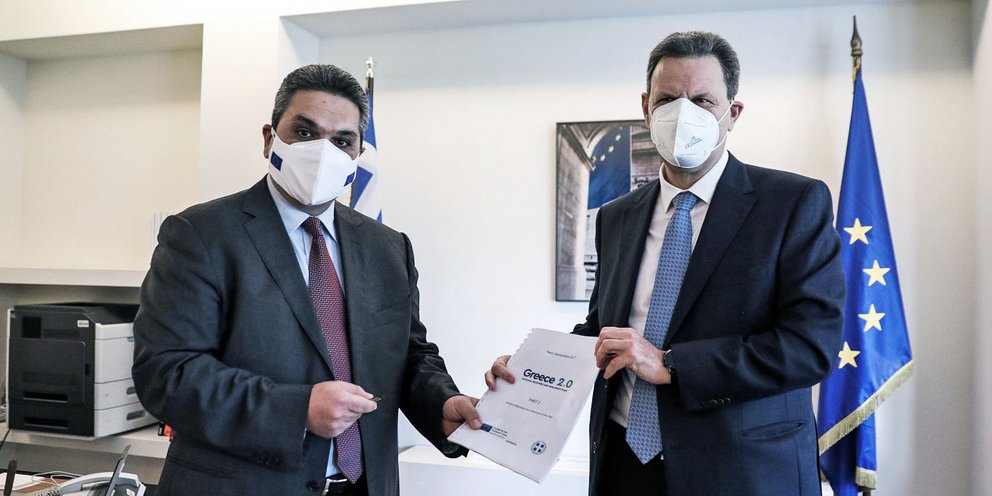 The Alternate Minister of Finance Mr.Theodore Skylakakis, visited the offices of the European Commission in Athens this morning and handed over to the acting Head of the Commission Representation in Greece Mr.George Moschovis, a copy of the National Recovery and Resilience Plan “Greece 2.0”, which was officially submitted yesterday to the European Commission.

The Alternate Minister of Finance made the following statement:

Our National Recovery and Resilience Plan “Greece 2.0” was submitted to the European Commission last night. The Plan includes 106 investment projects and 67 reforms, which are  described and costed in a most detailed manner, in 4,104 pages. Greece, thanks to the negotiation led  by Prime Minister Kyriakos Mitsotakis, has secured the most resources, per capita, in Europe from the Recovery Fund and is the second country to submit its final plan.

I would like to thank all those who have worked hard  in this common effort; namely,  the Ministers and their  teams, the members of the Steering  Committee , the Deputy Minister for Coordination of the Government, Akis Skertsos, the General Secretary of  Public Investments and PA, Dimitris Skalkos, the Head of the Economic Office of the Prime Minister, Alexis Patelis, the Chairman of the Council of Economic Experts, Michalis Argyros, the General Secretary for Coordination, Thanasis Kontogeorgis, and the Governor of the Recovery and Resiliency Facility Agency, Nikos Mantzoufas.

But first and foremost,  I would like to thank our Prime Minister Kyriakos Mitsotakis for his trust and guidance.

The first step has been taken. Now the even more difficult task of implemetation which will allow the country not only to achieve a dynamic recovery, but to enter the long path of a permanent growth and a new production model for the benefit of the entire Greek society, lies ahead. Our plan allows us to start the Facilitys reforms and investments immediately, with our own resources, until the Facility’s funding becomes available after the approval of our plan by mid-summer. It is a great challenge and a unique opportunity for Greece”.

This website uses cookies so that we can provide you with the best user experience possible. Cookie information is stored in your browser and performs functions such as recognising you when you return to our website and helping our team to understand which sections of the website you find most interesting and useful.

Strictly Necessary Cookie should be enabled at all times so that we can save your preferences for cookie settings.

If you disable this cookie, we will not be able to save your preferences. This means that every time you visit this website you will need to enable or disable cookies again.